At the Forbes Social Awards, Italian Company Pomilio Blumm With Offices Throughout Europe, is Commended as a Leading Communication Agency 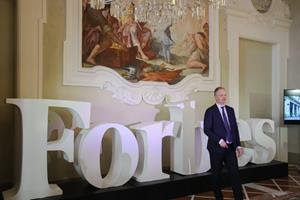 ROME, Sept. 16, 2022 (GLOBE NEWSWIRE) — The Forbes Social Awards showed the ever-increasing impact of public institutions on the health of society and economics. An impact made even more relevant if we consider the challenging times when this edition was held, after years of the Pandemic and after months of the war in Ukraine, meaning new problems for public institutions while the pre-existing ones are even more urgent, requesting new efforts for public communication and in the dialogue with citizens. Among the communication agencies, Pomilio Blumm had the lion’s share, thanks to its communication strategies which showed resilience in the new international reality for the EU. The Italian Agency is not new to such a feat, in a few years it has become the most commissioned agency in the EU, and is expanding also in other continents, with new offices and new projects. Pomilio Blumm is considered by the Financial Times among the fastest growing agencies, and recently announced a doubling turnover. To become one of the most important competitors in Europe for global institutional communication the company relies on advanced research centres, and has among its customers the European Central Bank, the EU Commission and the EU Parliament.

The institutions whose campaigns are “powered” by Pomilio Blumm are also the most interesting projects. EU-LISA, the European Union Agency for the Operational Management of Large-Scale IT Systems in the Area of Freedom, Security and Justice was awarded for the “innovative approach focused on the realisation of concrete digital information systems, producing multimedia applications as interactive publications […] to convert highly technical and complex concepts into appealing communication for the general public.”

The Italian Government (MAECI and ITA) was awarded for the nation branding campaign “Italy is simply extraordinary: beIT, promoting the ‘Made in Italy’ brand in support of Italian exports. It has a global dimension, putting Italy in the focus of an international public in original and innovative ways, and also Italy’s values and talents, its skills and its extraordinary potential. […] The project, based on the development of documentary and editorial content with an innovative profile, has involved exceptional testimonials, both from young talents and the most established stars, not least of them Giorgio Armani.”

DG NEAR, meaning Neighbourhood and Enlargement Negotiations, won the prize for the Young Europeans Ambassador Campaign in the Western Balkans “for the commitment to building this young and fresh team of people ready to make a real impact on EU-Balkan relations.” The G20 of Culture in Rome was also awarded, the summit on culture of the 20 largest economies in the world, for “the spectacular organisation of the Culture Ministerial Meeting, held in Rome, in an exceptional setting, in the centre of the Colosseum arena.” EFSA, the European Agency for Food Safety was awarded for the “One Conference, the product of an articulated and unified vision that took shape in Brussels by bringing together, under the helm of food safety, the visions of the main European agencies working on food and health safety.” EUIPO, the European Union Intellectual Property Office, was awarded for “its design awards, celebrated in the Dutch city of Eindhoven. The award raised awareness of the design protection system in the EU, and promotes design as a valuable intellectual property right that underpins the European economy.” Frontex, the European Border and Coast Guard Agency, was awarded for its activities; the agency promotes, coordinates and develops European border management in line with the EU fundamental rights charter and the concept of Integrated Border Management. A special mention was awarded to DGCOMM, for its super-partes inspiration of EU values to EU institutions.

The protagonist of the ceremony was Eike Schmidt, the director of the Uffizi in Florence, one of the most prominent museums in the world awarded for its communication. Schmidt explained the importance of Renaissance values for Europe and reminded how the mission of the museum in Florence is to have a “revolution in culture thanks to new methods of communication, but also a revolution in communication thanks to the artworks of our museum which we make come alive.”