Great Start for the Festival of Economics in Trento

THE FESTIVAL OF ECONOMICS IN TRENTO 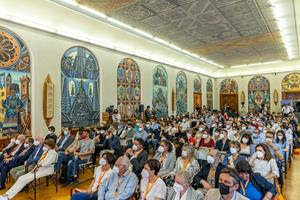 THE FESTIVAL OF ECONOMICS IN TRENTO

TRENTO, Italy, June 02, 2022 (GLOBE NEWSWIRE) — Festive atmosphere during the Festival of Economics, which started this morning with great participation, especially among young people.

Organised by the Autonomous Province of Trento, through Trentino Marketing and the Gruppo 24 ORE in collaboration with the University of Trento and the Municipality of Trento, the Trento Festival of Economics is now in its 17th edition.

The rooms were full of people at Palazzo Geremia to attend the dialogue between Ambassador Giampiero Massolo (President of ISPI and Atlantia) and Giuseppe De Bellis, Director of Sky TG24, as well as at Palazzo della Regione to see the acclaimed Tawakkul Karman, Nobel Peace Prize winner, the activist born in 1979 in Yemen, President of the Foundation that bears her name and founder of Journalists without Chains in 2005. And then at the Sala della Cooperazione for the meeting ‘Art 45, Constitution and Cooperatives: an indissoluble bond’, the Filarmonica where many people listened to Giovanni Tria.

In the afternoon, the Opening Ceremony of the event was held, opened by the dialogue between writer Silvia Avallone and Cardinal Gianfranco Ravasi, President of the Pontifical Council for Culture, who then gave the speech “For a new philosophy of development, between ethics and spirituality”.

The first day will end with two appointments of the Fuori Festival, the original and innovative programme of meetings with ‘educational’ and ‘engagement’ activities dedicated to children and students and with infotainment appointments for families and the broader public: at 8 pm the live show of the Radio 24 journalist and presenter expert on international current affairs and conflicts Giampaolo Musumeci in ‘Nessun luogo è lontano‘ (No place is far away) and at 9 pm the musical show of the Ciappter Ileven with ‘Antologia del serpente corallo’ (Anthology of the coral snake), a collection of the stories of swindlers, swindled people and swindlers told in their programme on Radio 24.