Highest Pools in the Southern Hemisphere Unveiled at Australia 108

The dual trapezoidal-shaped ‘twinfinity pools’ on level 70 of the 319-metre-high luxury tower perch 212 metres above ground and cantilever four metres over the streets below to offer a swim experience like no other.

They are the highest pools built in an apartment setting and the second highest in the world, trailing only the Ritz-Carlton’s level 118 pool in Hong Kong at 484 metres high.

Stretching 18 metres long and 5.3 metres at its widest point, the north-facing pool offers unrivalled panoramic views of the Melbourne skyline, while its south-facing twin looks out across Port Phillip Bay, Albert Park Lake and the Dandenong Ranges.

Both pools have been unveiled for their first official laps as part of the launch of Australia 108’s Star Club, two levels of unparalleled resident experiences spanning 2,800 square metres within the building’s Starburst.

World Class Global CEO David Ng said he was thrilled to be opening the Star Club to residents, which takes the lifestyle offering at Australia 108 to new heights.

“We are incredibly excited to open our spectacular Star Club at Australia 108. It is a huge milestone for the project and stellar icon for Melbourne’s skyline, featuring two of the highest and most breathtaking swimming spots on the planet,” said Mr Ng.

“The Star Club introduces a mix of social and wellbeing spaces for residents of Australia 108 situated at uncharted heights above the clouds.” 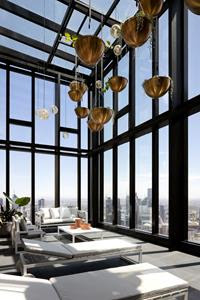 A green escape on top of the city at Australia 108.

All residents at Australia 108 can access all level 70 Star Club amenity, while purchasers in the tower’s premium collection of Cloud Residences above the Starburst have their own exclusive level of amenity, including a private infinity pool on level 70 and an entire floor on level 71 that includes an exclusive gym, dining rooms, a cinema, lounges and plenty more to enjoy. This adds to an already impressive list of conveniences on level 11 including a sauna and steam room, gym, lap pool and golf simulator.

Nicky Drobis, director at Fender Katsalidis, the architecture firm behind Australia 108, said the Star Club was designed to create a genuine sense of community at the megatower, which comprises 1105 apartments.

“A key objective for us when designing the Starburst was to create a civic-style environment that would help foster an authentic sense of connection among residents, like that of a town hall. It is humbling to see this being realised and residents embracing it,” said Ms Drobis.

“The Commonwealth Star on the Australian flag inspired our design for the Starburst and has supported our vision to create a truly innovative and iconic landmark for Melbourne.” 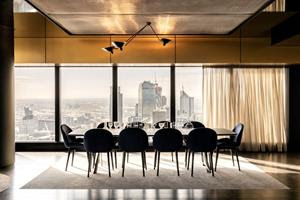 A stunning dining room at Australia 108

Carr managing director Chris McCue said the interiors inside the Starburst were created with a focus on resident wellbeing and flexibility.

“More than ever the setting of 2020 has validated the emphasis on resident amenity and wellness. The building provides a cohesive retreat with an abundance of amenities to genuinely enrich the lives of residents to foster community,” Mr McCue said.

“From an early design phase we recognised the role design has to play in the creation of the vision for a vertical community.” 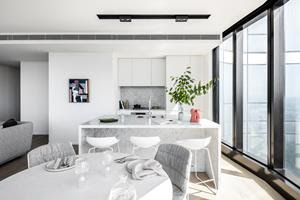 A marble kitchen within one of Australia 108’s incredible apartments

The Star Club is furnished with a selection of exclusive designer furnishings including artwork by South Africa’s Zarah Cassim, Melbourne’s Valerie Sparks and Laelie Berzon as well as Brooke Holm. Hub Furniture has brought in stunning pieces by Molteni and Moroso with stunning display items by Lowe Furniture, vases by Anna Varendorff and Bitossi as well as lighting by Roll & Hill.

Craning and affixing the Starburst’s cantilevered architectural components into position required new construction techniques specifically created for the project by Multiplex, including special construction platforms allowing workers to safely install the structure over 200 metres from the ground. 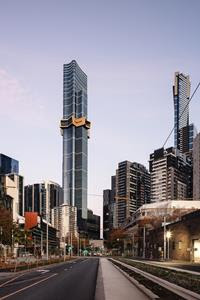 The unveiling of the Star Club comes shortly after Australia 108 unveiled its completed ‘Cloud’ residences late last year, including its level 97 ‘Nova’ sub-penthouses priced between $4,746,000 and $5,558,000.

A private sales gallery is located at 70 Southbank Boulevard, with private appointments available seven days a week. To make an appointment, call CBRE on 1300 888 770.

Photos accompanying this announcement are available at:
https://www.globenewswire.com/NewsRoom/AttachmentNg/f20f3389-8dc9-45e8-bbf8-fdad6f669b84

Colliers named to prestigious list by the International Association of Outsourcing Professionals for the 15th consecutive year TORONTO,...

CoImmune, Inc. Announces Appointment of Ed Baracchini to Board of Directors