Webtel.mobi Clarifies the Differences Between Its TUV Digital Currency and Cryptocurrencies 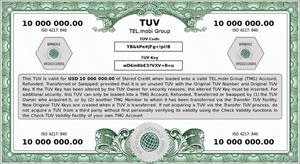 That is, they are Retail Commodities with no inherent value at all in, and of, themselves, other than a perception, among a limited group of adherents, that they have value (i.e., like the stamp-swapping market).

For Commodities with a baseline characteristic that their inherent value is zero; as soon as the perception of their value fails (due to regulatory requirements or introduction of a product that cancels out their perceived utility) their value returns to zero.

They are Speculative because they are, chiefly, acquired by persons with the hope their value will increase, and people will make money from them. However, as to where the value lies – it should be noted that speculative acquisition of Cryptocurrencies is not predicated upon how much more (crypto)coins one will gain from a rise price rise – but by how many dollars one will gain from a price rise. That is, even their adherents use Cryptocurrencies as a way to gain more money – which they see as the ultimate store of value.

The establishment of the price or value of Cryptocurrencies is driven solely by the fact there will only ever be a limited number of coins “mined” (made). This is the pure application of the principle of “Artificial Scarcity”. Artificial Scarcity is a term denoting specific characteristics – the details of which can be found online (or in the ‘Resources’ section of this article).

The variation in speculative value is driven by application of the principle of “Artificial Demand” – also a term denoting specific characteristics that can be found in an online search (or also in the ‘Resources’ section of this article). That is, its rise or fall in value is due (primarily) to media exposure usually geared towards advertising the potential for, and of, the gain of more money by speculative means – not due to any inherent quality of use or utility.

Due to the very principle that causes their perception of value to arise. (Artificial Scarcity), Cryptocurrencies can never be used in anything other than a limited “collectors” market.

As an example, if one takes the most successful Cryptocurrency that exists, applies a generous stable value to its total coin value – from the very first one of its coins mined to the very last one in its limited range – of USD 50 000.00, due to the limited number that will ever be “mined” (made), the total value of all of these coins in circulation will only be just over USD 1 Trillion (and, to be generous, one can even double, triple or multiply that number times 10).

However, just the annual settlement requirements in Gross Payments for Global FX requires a currency pool of USD 4 862 Trillion – and there are several markets that have a similar or larger annual volume.

This example demonstrates that the total value that can ever exist of the total number of (artificially made scarce) Cryptocurrency coins in circulation is so tiny and miniscule in comparison, that the market for Cryptocurrencies can never even be considered as being anything other than that which it is.

That is, a limited market of collectors and speculators, who have an interest in speculating – whether it be in the production / marketing / transactions / sale / acquisition roles – with a specific Retail Speculative Commodity – whether that commodity be stamps, Cryptocurrencies or any of the various and multiple other such items that are held as being of value by adherents.

To its adherents and those who engage in speculative trading with it, a Cryptocurrency’s perceived value will be X – until the perception of its value is lost, whereupon it baseline value will return to zero. Outside of the circle of adherents and speculators, its value will always be zero.

The currency of which the TUV represents value can be converted to any other currency – whereupon the TUV will be the Digital vehicle for the currency and value that it has been converted to.

Consequently, a TUV is, simultaneously:

As such, it is none of, any of and all of the World Reserve Currencies and WM Platform Currencies, all at the same time.

In Summary, a TUV Digital Currency bears no resemblance to or relationship with a Cryptocurrency – other than the basic elements of Cryptocurrency Blockchain, Distributed Ledger and Private Keys are also part of the TUVs’ security structures. However, these three elements are – for the TUV – very basic security elements, and are far surpassed by dozens of personal, system, processes, and other additional security and structural attributes.

Overview of the principle of “Artificial Scarcity”:
https://en.wikipedia.org/wiki/Artificial_scarcity

Overview of the principle of “Artificial Demand”:
https://en.wikipedia.org/wiki/Artificial_demand

Video on the Capacities of the WM System:
https://youtu.be/XYBrCikUhn8

Research Reports on the Capacities of the WM System:
https://tinyurl.com/TUVresearch

A photo accompanying this announcement is available at https://www.globenewswire.com/NewsRoom/AttachmentNg/d2430ed5-d51a-4706-92cf-4c762e488b47